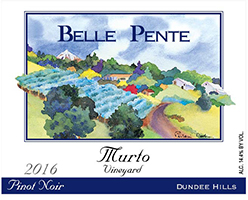 We’ve been making single vineyard Pinot Noir from Mike and Robin Murto's outstanding old vines (planted in 1978) for over 20 years. Although this mature vineyard delivers the goods every year, it’s high elevation Dundee Hills location makes it really shine in warm vintages, and this 2016 rendition is a classic “case in point”!

The 2016 growing season started out looking a lot like 2015. It had an early start, with flowering beginning at the end of May. But unlike 2015, the cooler, damper conditions during bloom resulted in a 30% smaller crop than the bountiful harvest of 2015. The warm summer that followed resulted in the earliest harvest ever for this vineyard, beginning on September 19th and wrapping on the 20th. The Murto vineyard generally gets harvested in October, so we were done before we would even start in a “normal” year!

The signature Murto profile includes red fruit and spice. This 2016 version reflects it’s warm growing season with intense ripe raspberry flavors and aromas, complemented by baking and exotic spices wafting above the fruit. It is a rich, concentrated wine that also retains freshness and balance due to the high elevation of the vineyard.

Delicious now, it will also reward 10-12 years of cellaring. Enjoy with grilled salmon, mid-eastern accented dishes, and anything with small birds!